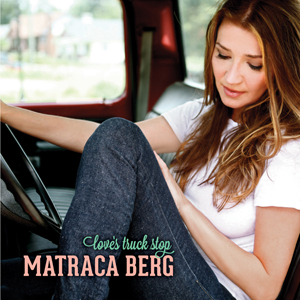 Proper Records are thrilled to announce the release of the new Matraca Berg album, ‘Love’s Truck Stop’ on October 22. One of the most consistently successful songwriters in America and also a great singer, she only rarely makes her own albums.

Matraca Berg didn’t set out to write five #1 hits in a single calendar year… to be nominated for Grammys in each of the past three decades… to have her seminal Sunday Morning To Saturday Night named one of the 10 Best Records of the Year in any genre by Time, Entertainment Weekly, USA Today and People, as well as myriad daily newspapers… or to end up in the Songwriters Hall of Fame at such a young age.

Matraca, who was born and raised in the shadows of Nashville’s famed Music Row, wanted to reach into her own soul and shine a common light. Along the way, her exhumations have pondered the exultance of love, the strength in troubled times, the sass of knowing one’s mind and the waves of sorrow that are so much a part of life. While the Dixie Chicks, Gretchen Wilson, Patty Loveless, Deana Carter, Reba McEntire, Martina McBride and Trisha Yearwood have always gone to the woman with the deep-set cocoa eyes for emotions served straight, it is in her own voice that the songstress’ stories ripple with the most nuance.

But getting the introspective songstress to come forward is not always easy. When one bares their emotions, offers pain and falter without flinching, there is a natural gap that most be braved – and Berg would rather write the truth than throw herself out for the mass to consume. But when you love the people you write about, know the songs from the inside out the way the CMA Song of the Year winner does, there comes a point where being a good steward takes precedence.

Like Joni Mitchell, Berg is very much about the depths of the emotions, the trigger points of the conflicts and the lightness of letting go.