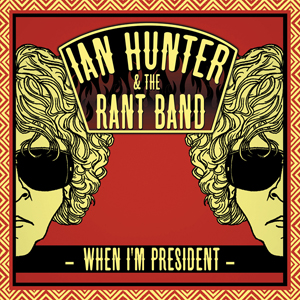 As leader of ’70s British rock legends Mott the Hoople and as a hugely influential solo artist, Ian Hunter is widely revered as one of rock ‘n’ roll’s most compelling performers and one of its most articulate songwriters.

On September 3, 2012, Hunter will release When I’m President, his 20th album of original songs, and the latest highlight in a storied career that’s produced immortal anthems like “All The Young Dudes,” “All the Way From Memphis,” “Once Bitten, Twice Shy” and “Cleveland Rocks.”

The new album’s 11 Hunter originals include such infectious, personally charged numbers as the wry, socially conscious title track, the gently introspective “Fatally Flawed” the bittersweet ballad “Black Tears,” the chugging rocker “Wild Bunch,” the swaggering “I Don’t Know What You Want” (which features a guest vocal by Hunter’s son Jesse) and the vivid, haunting “Ta Shunka Witco (Crazy Horse)” — all of which showcase the jagged immediacy of Hunter’s one-of-a-kind voice and the punchy authority of his longstanding all-star backup combo the Rant Band.

“The songs seem to be more upbeat this time round,” Hunter notes. “The last two albums were pretty political, just because I thought the Bush years were horrible, and thankfully that’s passed. But I don’t go looking for songs; I have to wait for them to come to me. I had a spurt there in the summer of 2011, and that grew into this album. I’d get up every day with something ringing in my head, so I’d try to catch it and get it down. Songwriting’s always been a mystery to me in that way. Now and again you’re nearer the sun, and you have to be ready to capture it.”

The qualities of musical depth and emotional honesty that distinguish When I’m President have been constants in Ian Hunter’s expansive body of work. Hunter was already a young veteran of London’s burgeoning rock scene when he joined Mott the Hoople in 1969, and recorded four iconoclastic albums with the quintet by the time it rode the glam-rock wave to international superstardom with the David Bowie-produced 1972 album All the Young Dudes and its Bowie-penned title hit. The band’s artistic and commercial success continued with 1973’s Mott and 1974’s The Hoople and Mott the Hoople Live, helping to set the stage for the rise of British punk and new wave before the group disbanded in 1974.

Hunter moved to New York and segued into a celebrated solo career with 1975’s Ian Hunter, quickly building a formidable body of solo releases that expanded upon the achievements of his former band.

Following 1983’s well-received All of the Good Ones Are Taken, Hunter took an extended hiatus that kept him out of the spotlight for much the next decade, until the 1993 death of his longtime friend and collaborator, guitarist Mick Ronson, jolted him back into musical action.

Hunter’s creative rebirth has produced some of the best music of his lengthy career, and When I’m President continues the remarkable resurgence of this true believer in rock ‘n’ roll’s transformative power.