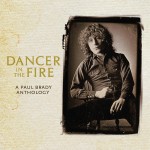 Originally from the ‘True For You’ album, Steel Claw is about the underbelly of Dublin in the early 80s and became one of Paul’s most succesful songs via the 1984 Tina Turner version on ‘Private Dancer’. Paul says about the original, “My voice and spirit were really tired by the end of these album sessions and I never liked the final result”, as such the ‘Dancer In The Fire’ version features a new vocal recorded in 1999.

The video was recorded as part of the Paul Brady Special Propermusic.com Podcast which will be released next Monday (30th April). Paul’s new album ‘Dancer In The Fire: A Paul Brady Anthology’ is available now from Propermusic.com, Amazon and iTunes. To promote the new album, Paul will be embarking upon a UK tour which starts this Friday at the Brewery Arts Centre in Kendal, see below for the full list of upcoming dates.