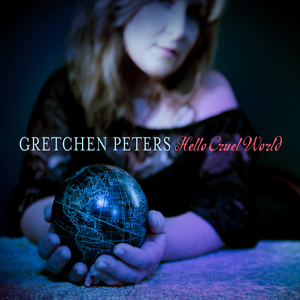 The title of Gretchen Peters’ new album Hello Cruel World (due for release by Proper Records on the 30th January 2012) is a pun on the famed exit line — a joke that, like the lovely melodies and deliciously textured arrangements framing these 11 songs — sweetens this captivating music spun from a year of turmoil. The Grammy nominated singer-songwriter from Nashville calls Hello Cruel World her “most close-to-the-bone work, written at a time when I felt absolutely fearless about telling the truth.” Peters and her guest Rodney Crowell sing, “life is still a beautiful disaster,” on ‘Dark Angel.’ But Peters keeps the accent on the “beautiful” throughout her ninth disc, with both her poetic language and the spare, evocative sounds she created in the studio to support her organic story-telling.

Peters says creating Hello Cruel World “was like coming home after a long trip, unlocking the front door and putting my baggage down. Telling these stories was part of the process of stripping myself bare of all the lies, halftruths, false selves and misguided intentions we take on in the course of living. After the trials of the past year I felt raw, open. I wanted to write songs that hurt. I wanted to write songs that were brutally honest. I knew it would be a dark album, and I knew it might be off-putting for some. But I felt I had survived the battering of both the natural world and my own interior one for a reason.”